"Yeah it was scary!  The car was 600 yards away and I ran as hard as I could PRAYING not to get struck. I lasted about 150 yards then screeched to a walk, out of oxygen, wasted, and praying I WOULD get struck."  -- This is from a recent conversation with an awesome, fit, brother-in-law who lives in Texas but visits Colorado quite often. A storm sneaked upon his group from the blind side of the mountain while they fished. He made it safe to the car and back down the mountain where he said,  "I went straight to my tent, laid down, and it took over 4 hours before I felt right again"

According to a write up Wild Backpacker on average there are over 50 deaths from lightning strikes annually in the United States and as many as 24,000 globally.  In previous post I pointed to data the reported that the county Pike's Peak resides in, El Paso County, was the second highest in Colorado for cloud to ground lightning strikes.  Immediately below is an excerpt from a previous post, "Barr Trail, This is Not a Walk in the Park" Followed by that are What to do, and what not do that I have read during my research for this post.

Keep in mind too that when hiking up Pike's Peak, based on your altitude, you could end up INSIDE the cloud where lightning is occurring. 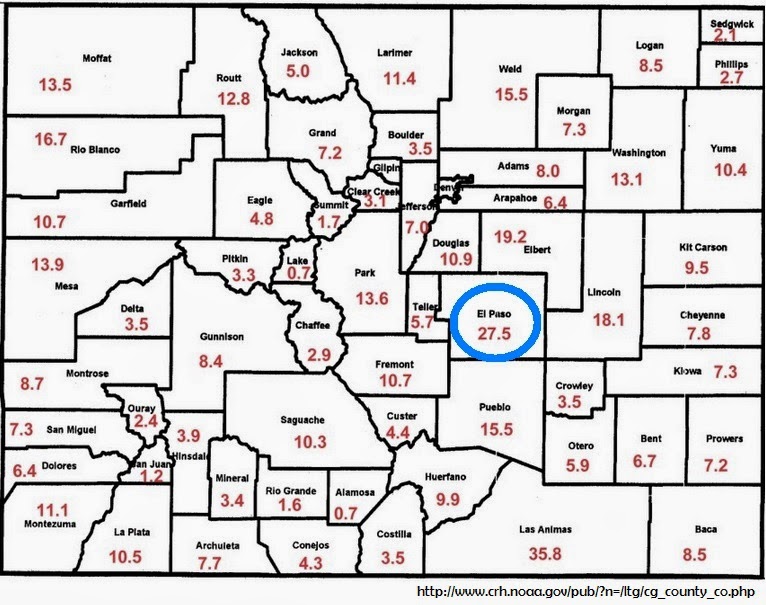 Below is table, also from NOAA, that provides statistics on lightening injuries and fatalities. It is critically important  to understand what to look for to avoid being caught in a lightening storm and safety measures to take in the event you do become so.  My eyes did widen a bit when I saw there were 12 injured by lightening last year in El Paso county.  Hovering over that row in the table you will find a link to a story that reports this was a single event on an Army base.

The Lightning Position:
If are in a situation where a lightning storm is upon you and you are not in a modern structure or a hard topped vehicle then a safe measure to take would be to get into the Lightning Position.  The goal is to create as SMALL a front print as possible touching the ground and to be as low as possible.
Remove any protruding metal from you (i.e. back pack frames, trekking poles) and distance from it,
Put both feet closely together (if possible get on a foam pad or pack with no metal)
Squat down on the balls of your feet
Head down and hands over your ears

If you are with others then separate out at least 50' from one another.  The point of this is that it will hopefully reduce the number of casualties if there is a strike and allow others to render aid to anyone who is struck.

Prevention is Best:
1.  Time visits to high risk areas with local weather patterns.
2. Keep an eye on the weather and turn around to safety sooner rather than later

Seek Shelter:
1. An enclosed modern structure is best, a hard topped vehicle is a runner up
2. If there is no structure or vehicle then head for safer terrain
a. If on a mountain; descend, most preferably on a side not covered by clouds, below the tree line is safer than above
b. If there is no more time to descend, meaning the lightning is upon you or soon will be
i. find a significant depression and go to it get into the Lightning Position
ii. find a grove of trees trying to surround your self with shorter trees which hopefully are further out surrounded by taller trees.  Lightning tends to strike the tallest object.  Get into the Lightning Position.
A GROVE OF TREES IS SAFER THAN OPEN TERRAIN; WHERE YOU MAY VERY WELL BE THE TALLEST OBJECT.
3. If 1 and 2 are not options and the storm is upon you get into the Lightning Position.

What to Avoid:
1. Being the tallest object if possible! (BUT DO NOT LAY DOWN; get in the Lightning Position)
2. Do not stand or seek shelter under the tallest object
3. Peaks and ridges
4. Overhangs (this includes your front porch by the way)
5. Wide open ground

What do if someone is struck:
If an individual is struck by lightning it is best to render aid as soon as safely possible.

There is a high chance that the individual may be in cardiac arrest (their heart has stopped beating) and that they are not breathing.  Training in CPR and First Aid are offered in multiple venues.  Classes, training methods, and reference info; including phone apps, backed by the Red Cross and the American Heart Association can be found on line.
Click Here for the Red Cross
Click Here for the AHA

A Handy Lightning Risk Management Pamphlet for Hikers and Campers
The NOAA, the National Weather Service, and NOLS, have put together a PDF to be downloaded, printed, followed, and toted.  It is very illustrated and informative. I especially like the large "at a glance" graphic that shows examples of areas the at greatest risk to least risk.

NOLS also has a nice write up on backcounty lightning risk management that explains the "why" to some of the safety precautions advised to be taken,  Such as seek a grove of small trees next to larger trees. Click Here to view their document.

Posted by Joseph Kahlich at 2:49 PM